This Art pictures a Dodge Challenger with wheels on fire, and shows my passion for Digital Arts and cars.

The Dodge Challenger is the name of three different generations of automobiles (two of those being pony cars) produced by American automobile manufacturer Dodge. However, the first use of the Challenger name by Dodge was in 1959 for marketing a "value version" of the full-sized Coronet Silver Challenger.

The second generation, from model years 1978 to 1983, was a badge engineered Mitsubishi Galant Lambda, a coupe version of an economical compact car.

Article How to Create Cool Digital Artworks with Cars, Trucks, and Fire

"Tips from Matthias" Series — the Netherlands

We all want to create cool Artworks every now and then, don't we? So, why not you? And why not just start today?

And we all also like driving, don't we? And what about some cool futuristic car that has wheels of fire? Or some other magical force — for the sake of being cool and having superpowers combined with some sweet V8 engine powers!

Alright, let's get started on the basics of creating such vivid and magical artistry and let's have a lot of fun while doing so!

Have a beautiful image of your favorite car or truck ready. This is something you can make yourself or have it made for you.

Make sure to firstly create a beautiful composition with the vehicle of your choice having a prominent position on your canvas.

Also, think about the background scene, you might want to add a beautiful sunset or a dramatic cloudy sky to complete the look.

Create a Cool Day or Night Scene to Complete the Look

Now what we want to do is to create a single look for the awesome action image. By this, I mean that the overall lighting and color theme is similar.

So for example, if you wish to create a night scene (as I did with this Artwork), you'll have to darken the image and give it more of a blue tint.

With this Artwork, the original image was made in broad daylight, and I made the scene darker (as said before) and I added the sunset sky in the background to make it look like it's peaceful evening scene.

Now, it's time for the even-more-fun part! Let's get some really cool magic, fire or lightning effects in!

I usually use a photograph of fire, a water splash or a lightning image to create the beautiful and mesmerizing light effects that make me very happy with the end result.

I always blend the fire and light effects in the image and then I add some cool glows, flares and most important — the color blend to mix the effect with the original scene.

Now ye shall go out and do as thy feel thus creating a new and inspiring digital masterpiece that shines with the brightest of futuristic Art effects and colorful pixels!

A Little Longer Description of Artwork "Wheels on Fire"

This cool and exciting Digital Artwork pictures a dark blue Dodge Challenger, with wheels that are on fire! The beautiful and soothing evening sky in the background make this Artwork almost feel surreal — in a peaceful kind of way!

The overall scene is taking place during the night. This makes the fiery wheels pop out like fireworks! The headlights are on, shining brightly on the concrete floor, with a futuristic blueish tint.

The windows of this epic vehicle are tinted black, which makes the superior driver almost invincible. The sports car also features a black stripe, all the way from the front bumper, over the hood, the roof and all the way to the trunk of this very cool vehicle. 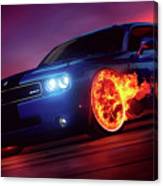 Art - Wheels on Fire is a Digital Artwork created by Matthias Zegveld, published on 2012-08-27.

Fine Art America is the ideal place for buying popular and original art in the form of art prints and home products. This site offers many wall art options for this unique Artwork, such as fine art print, canvas print, framed print or acrylic print.

You can also choose from many home decor and lifestyle products for sale, such as pillows, mugs, tote bags or puzzles. There are also popular stationery items such as greeting cards or spiral notebooks.